DVD-0895 Legends of the Rainbow Lady

Highlights: Supreme Master Ching Hai told Chinese legends of Mazu the Ninth Fairy and the Rainbow Lady with humorous explanation. Through the stories we learn the influence of our ego karma original sin and the real meaning of immortality. The Supreme Master also expressed Her deep sorrow for the suffering people and animals. She said that I never feel that I do enough as long as one person still suffers in this world and one animal is still being slaughtered mercilessly. As a human we should take everybody’s disaster as our disaster continue to inform everyone the truth about the meat industry and help those who have been pressured by the physically depressing world and depleted of all the goodness and intelligence within them. If everybody will do for the same thing with positive consciousness we would have very benevolent energy to help create a vegan planet in the future. Date: 2009.01.26 Place: France Occasion: International Seminar Language: English and Chinese Subtitles: Arabic Aulacese Bulgarian Simplified Chinese Traditional Chinese Croatian Czech English French German Hindi Hungarian Indonesian Italian Japanese Korean Malay Mongolian Persian Polish Portuguese Punjabi Russian Sinhalese Spanish Thai (26) Number of DVDs: 1 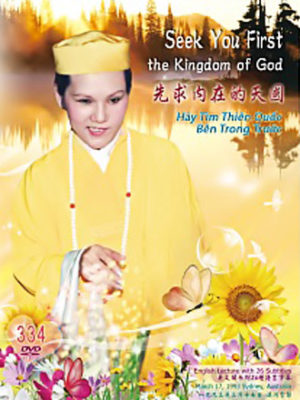