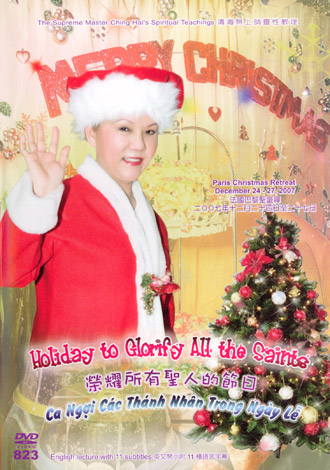 DVD-0823 Holiday to Glorify All the Saints

As the DVD begins our happy Santa Supreme Master Ching Hai is singing songs and handing out presents to Her hard working elves! Initiates from all over the world then sing festive songs to celebrate the birth of Jesus who Master said “symbolizes all the Masters” whose birthdays we don’t officially celebrate. Later Master discloses where “heavenly wine” comes from and then proceeds to cut the big vegan cake! A touching moment concludes the party when Master sings a meaningful Christmas song in Aulacese. In the second part of the DVD the Supreme Master tells a story of wisdom about the Sufi Master Hilali. In one part a mighty king goes out hunting for sport to which Master openly disagrees and explains: “Cruelty is never a sport. Cruelty is never a mark of a man.” Therefore may all joyous occasions be celebrated with animal-free cuisine. Date: 12/24 28/2007 Place: Paris France Occasion: Paris Christmas Retreat Language: English Subtitles: Aulacese Simplified Chinese Traditional Chinese English French German Indonesian Japanese Korean Spanish Thai Number of DVDs: 1 DVD-0467 The Suffering of This World Comes from Our Ignorance DVD-0676 Parliament of the World’s Religions